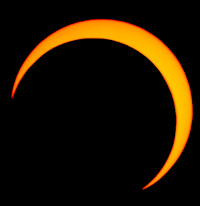 In New Jersey we saw a partial eclipse (about 73%). The student-led Rutgers Astronomical Society hosted a viewing at the Robert A. Schommer Astronomical Observatory in Piscataway.

The eclipse viewing event was from 12:30pm - 4:00pm, held in room 401 of the Serin Physics & Astronomy building, on Busch campus. The transit (of the Moon blocking out the Sun) began around 1:20pm, and the Moon's greatest blockage of the Sun was at around 2:40pm.