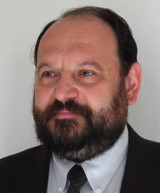 Multipolar interactions and related ordering phenomena have attracted great interest. Multipoles are related to exotic phases including possible multipole-fluctuation induced superconductivity and hidden-order phase. For a systematic investigation of the collective behaviors of multipole moments, f-electron systems are suitable choices since the interplay of spin and orbital degrees of freedom of f-electrons facilitates multipole formation.

In this work, we report Raman-scattering results of YbRu2Ge2 single crystals. This heavy-fermion metal has been suggested to enter a ferroquadrupolar (FQ) phase below T0=10K. We determined the crystal-field (CF) level scheme of Yb3+ ground multiplet in YbRu2Ge2. Importantly, the lowest-energy CF transition couples to the quadrupolar fluctuations above T0. From symmetry analysis, we further suggest that the FQ order has B1g symmetry.

Our study demonstrates the ability of Raman-scattering technique to probe the symmetry of dynamical fluctuations above unusual electronic phase transitions. Moreover, determination of the CF level scheme, and identification of the symmetry of the FQ order of YbRu2Ge2 will not only serve as basis for future study of this model system, but also inspire more interest in multipole-related phenomena.