History of Astrophysics at Rutgers

Two terms of physics and one of astronomy were required of all students through the 1800's. George William Hill (A.B. 1859, A.M. 1862, Ph.D. 1873) went on to do fundamental work in celestial mechanics. He was the most illustrious astronomy graduate of this period, becoming a member of the National Academy of Science, of the Royal Astronomical Society (Gold medal), and a Fellow of the Royal Society (Copley medal), among other honors. 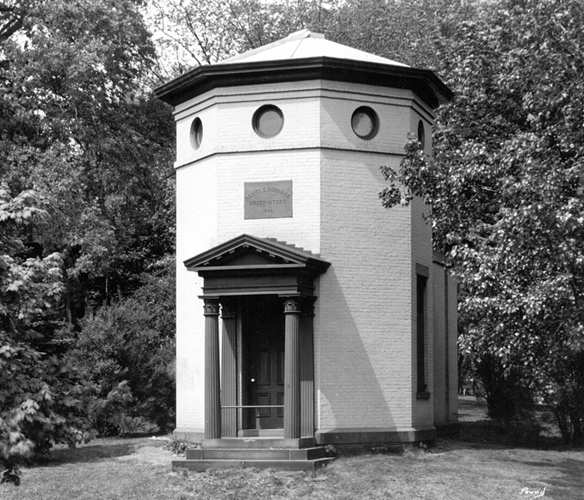 Though the university purchased a telescope as early as 1827, the first observatory on the Rutgers campus, shown to the right, dates back to 1866. The primary instruments were a 6.5-inch refracting telescope and a meridian circle with a 4-inch telescope.

Robert Atkinson, on the faculty from 1929 to 1937, did early work on nuclear fusion as the source of energy in stars and on stellar nucleosynthesis. With his departure, work in astrophysics lapsed until the 1970's. More history.

Astrophysics in the 21st Century

The number of faculty and researchers in the group doubled in the late 90's. Today, Rutgers astrophysicists use a variety of space borne observatories, including the Hubble Space Telescope (HST) and Chandra X-ray Observatory, as well as world-class ground-based facilities. Researchers and students work across the electromagnetic spectrum from radio and submillimeter, to infrared and visible, to ultraviolet and X-ray wavelengths, including playing key roles in the development of new instruments.

Rutgers has strong programs in theoretical astrophysics, especially in the large-scale structure of the universe and in the formation and evolution of galaxies.