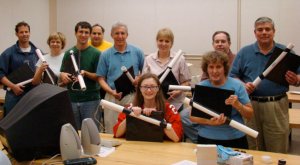 We run and maintain the very active and productive Rutgers QuarkNet Center. Over the past three years, we have distributed twelve cosmic ray detector kits supplied by QuarkNet to high school physics teachers throughout New Jersey. The figure on the left shows a group of teachers at one of the workshops that we held on construction and use of the cosmic ray counters. During the summer of 2009 we held our third annual QuarkNet-supported Summer Research Program for High School Students. We have found this to be a highly effective program. 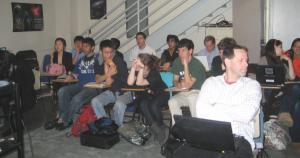 In 2009, the summer students constructed a large, 1.2 m x 0.9 m, cosmic ray scintillation counter built from scintillating bars read-out by wavelength shifting fibers that we acquired as surplus from the Minerva Experiment at Fermilab. We have enough scintillating bars on hand to construct nine of these counters. The counter that the students built and tested this summer is a prototype for a large-area array of counters, approximately 0.1 km2 in area (300 m x 300 m), that a collaboration of New Jersey high schools will build, operate and analyze. It will be sensitive to the highest energy, 10^16eV, galactic cosmic rays that are of great interest since their galactic origin is unknown. Once the array is deployed, students will use techniques developed by the HiRes Collaboration to determine the impact point of the showers and the direction of the primary cosmic rays. This past March (see figure on the right) the students observed cosmic ray signals from the counter and demonstrated proof of principle. Three of the students will continue their work during the coming school year. We plan to construct the remaining eight counters by spring 2010 and to deploy the array in summer 2010. We will hold a multi-day workshop within the next six months to inaugurate the program and form the collaboration.

Steve Schnetzer, Yuri Gershtein and Eva Halkiadakis as well as Ron Ransome from the Rutgers nuclear physics group are all actively involved in this program. We also also participated in the QuarkNet-sponsored EPPOG Hands on Particle Physics MasterClass this past March. Approximately twenty students with their teachers from three schools participated in the program. Students analyzed event displays of real data from the Delphi detector from LEP to measure Z boson branching fractions and then presented and discussed their results in an international teleconference.